The multi-billion Project Clear investment in St Louis is one of the largest of the Federally-mandated CSO programmes in the USA currently. Originally mandated by the Federal Environmental Protection Agency (EPA) in 2012, the programme of work comprises more than 32 miles, or more than 46km, of major underground infrastructure across eight separate tunnelling contracts, programmed across 25 years from 2014 to 2039 and accounting for about a third of the total investment budget.

Of the eight underground elements (Fig 1 and Table 1), the Lemay redundant force main was completed in 2015 and is in service and three are underway with two of these, Maline Creek and Jefferson Barracks, due to be completed in 2020 and the third, Deer Creek, in 2022. The next phase of excavation, the Lower Meramec segment, is due to start construction later in 2020 and the remaining three elements are in planning for construction in the late 2020s and 2030s to meet the mandated in-service deadline of 2040.

Construction of these later alignments was pushed back after the Metropolitan St Louis Sewer District (MSD), the project owner, moved forward installation of fluidised bed incinerators at its sewage treatment plants.

Contractor prequalification for the 6.8 mile x 8ft (11km x 2.4m) i.d. Lower Meramec tunnel was completed in December 2019 and contract award is expected in August 2020 for construction to begin before end of 2020. The alignment will run between 78ft and 286ft (24m-87m) deep, making use of an existing 35ft (11m) diameter construction shaft, and will terminate at a proposed 33ft (10m) diameter construction shaft near the Fenton treatment facility. Six drop structures for drop pipes ranging in size from 8in to 30in (20cm to 76cm) in diameter are expected to be excavated using drill+blast or raise boring.

As an extension of the existing 3.8 mile x 12.5ft (6km x 3.9m) i.d. Baumgartner tunnel, the Lower Meramec alignment is expected to encounter the Warsaw Formation and Burlington-Keokuk limestone formations, which consist primarily of limestone, dolomite, and shale. The Burlington-Keokuk limestone includes significant amounts of chert, accounting for up to 60% of the rock mass in places. Tunnel design work was undertaken by WSP as a subconsultant to HDR Engineering and Construction Manager for the project Black & Veatch. 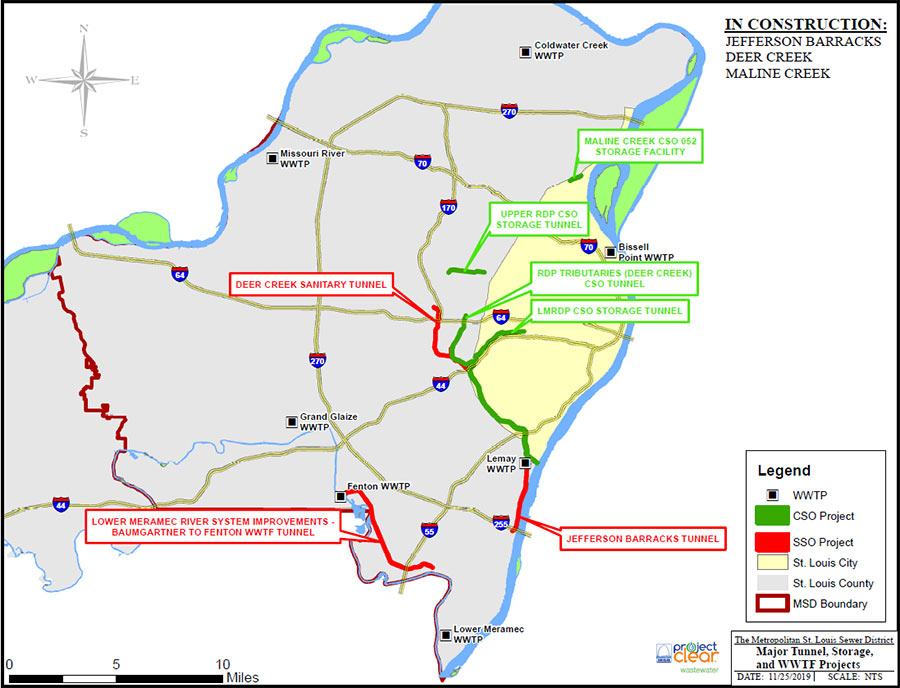 The drill+blast cavern is 140ft deep in limestone bedrock. Excavation was challenged by the proximity of the project to the floodwall that provides protection to St Louis. A 6ft (1.8m) adit from the main cavern crosses beneath the floodwall, which required close co-ordination with the US Army Corps of Engineers and close monitoring of the floodwall.

Concrete lining of the cavern was completed in August 2019, while lining of the pump station was completed in September 2019. Final completion of the facility is expected in October 2020. When operational, the pump station will have capacity of 12.5 million gal/day and will feature five submersible non-clog pumps that will empty the storage facility into the existing North Bissell tunnel, which runs to the Bissell treatment station. 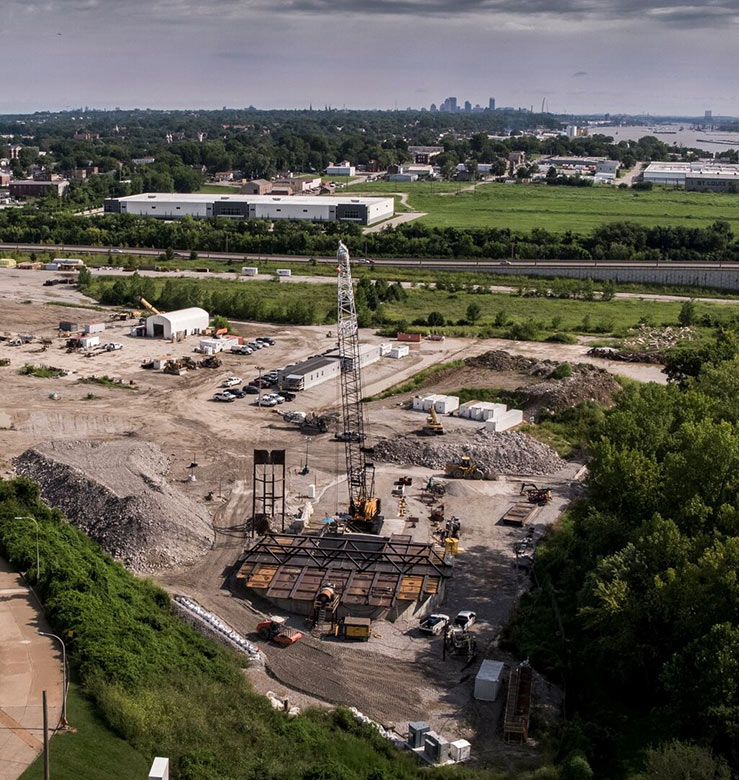 Contractor SAK for the 3.5 mile x 11ft (5.5km x 3.6m) i.d. Jefferson Barracks tunnel received notice to proceed in March 2017 and launch a Robbins gripper TBM for excavation in December 2018. Located adjacent to the Mississippi River at a depth of 140ft to 215ft (47m-65m), the alignment is intended to replace an aging system of pump stations, force mains, and shallow sewers that currently convey wastewater to the Lemay treatment plant. The project includes installation of a 7ft FRP carrier pipe and fibre optic conduits within the tunnel.

In addition to the 88ft (27m) diameter launch shaft, which will serve as the dewatering pump station, and 22ft (6.7m) retrieval shaft, there are 13 bored shafts for drop and vent pipes and fibre optic conduits. As these shafts pass through a karstic zone below the level of the Mississippi River, all were blind bored. The presence of karstic zones has been the most important geotechnical issue for the project, influencing the vertical alignment of the tunnel, the design and construction of the shafts, and calling on pre-excavation grouting to minimise inflows. Completion of the tunnel is anticipated in May 2020. The 15 million gallons/day dewatering pump station will then be constructed under a separate contract when the tunnel is complete and will feature five horizontal dry-pit centrifugal pumps.

Jacobs Engineering Group was responsible for the design of the Jefferson Barracks tunnel and Shannon & Wilson is the Construction Manager. 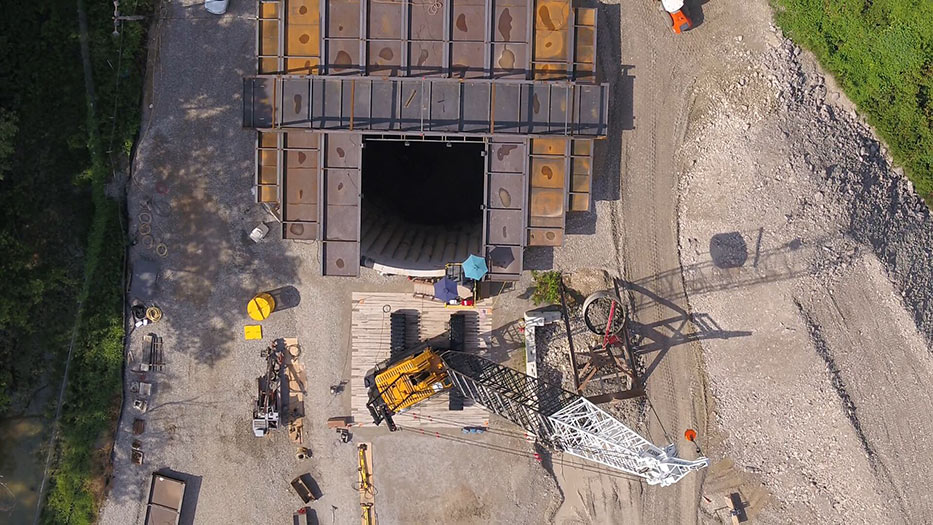 Notice to proceed SAK Construction on the $147.8 million 4.3 mile (7km) Deer Creek tunnel was given in early September 2017 and the project is about 63% complete to date. Excavation of the 40ft i.d. pump station dry well shaft and two 40ft i.d. wet well shafts is finished, while the starter and tail tunnels have been bored, and the Robbins main beam gripper TBM is about 18,500ft (5,639m) into its drive. Work has also been performed at each of the five drop shafts with excavation starting on the 35ft i.d. retrieval shaft.

Two-pass construction is being used on the Deer Creek tunnel, which runs at about 120ft (36.6m) deep through bedrock of limestone/dolomite with confined compressive strengths ranging up to 22,000psi. Rock dowels and mesh are providing the initial support with a 12in (30cm) thick cast-in-place concrete final lining. Muck is being removed by continuous conveyor from the heading with a vertical conveyor up the shaft to the surface.

Parsons Water and Infrastructure Inc was responsible for tunnel design and Black & Veatch is Construction Manager. 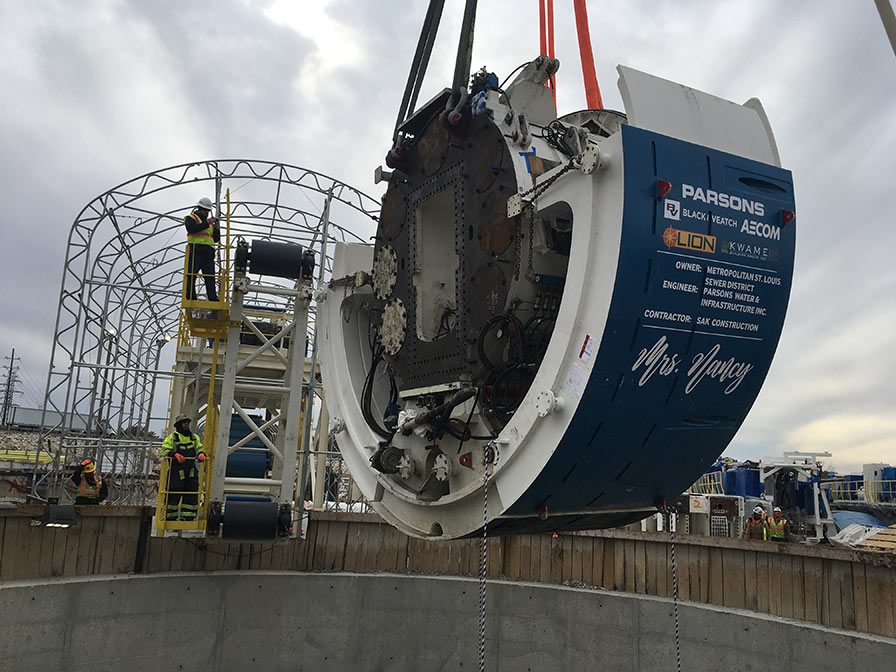 The future for Project Clear

After completion of the Lower Meramec tunnel, underground work is anticipated to begin again in 2027 with the Lower and Middle Des Peres CSO storage elements. Designed by Jacobs Engineering, the 8.6 mile x 200ft (14km x 60m) deep alignment is the longest of the Project Clear tunnels and is anticipated to cost about $640 million to build in 2017 dollars. In addition to the main line, there will be 5,000ft (3,353m) of large drill+blast connecting tunnels and a 191ft x 57ft x 85ft (58m x 17.5m x 26m) cavern to house a pump station.

The alignment runs generally along the River Des Peres through limestone bedrock and will intercept CSOs from 35 locations. The main excavation is expected to be by TBM launched from the downstream construction shaft.

The alignment had to be relocated during design, following identification of a fault along the original route. A further challenge to design was the large intake size of 4,420ft3/sec at the upstream end of the tunnel. Designing the intake structure required computational fluid dynamics modelling, as well as physical modelling, to optimise structure dimensions. Modelling was also used to design the initial support for the pump station cavern. The Lower and Middle River Des Peres pump station is expected to have a capacity of 100 million gal/day with seven vertical and two horizontal dry-pit centrifugal pumps. 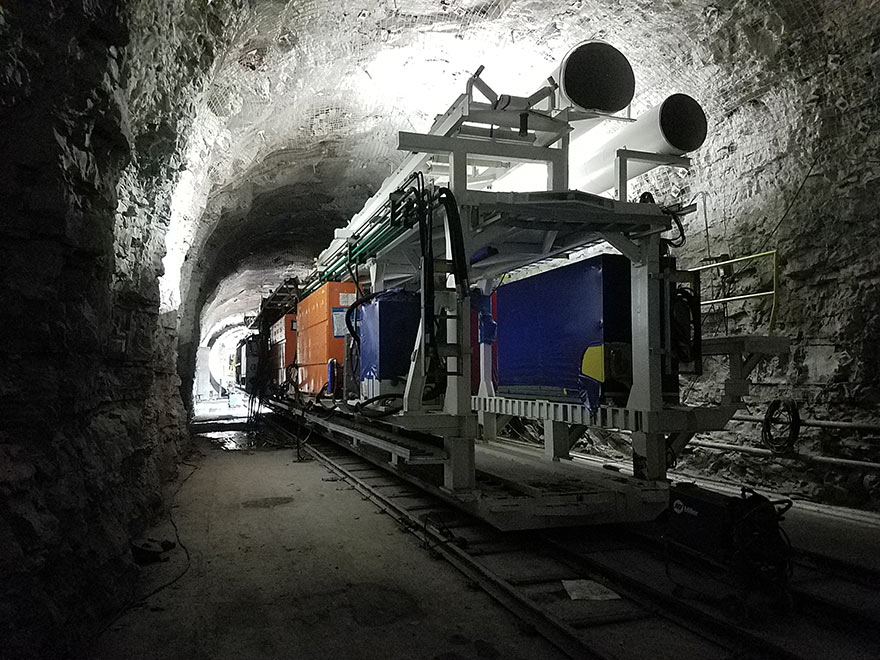 Deer Creek TBM is about 4,000ft into its drive

As with all major infrastructure initiatives, the projects and activities included within Project Clear has had an impact on everyone living in proximity to the work as well as financial impacts to all MSD rate payers. Communication has been of vital importance to keep people informed as to why their rates are going up, what work is happening, and the impact to be anticipated.

The Project Clear brand was created to help that and has been so successful that MSD has expanded the range of work included within Project Clear beyond the work mandated by Consent Decree to encompass all stormwater and wastewater services. The priority in this has been to make sure the people of St Louis, who are paying, not only reap the benefits but get to see and understand what is being done.

How can SAK help you?